In a statement to ACI Prensa, CNA’s Spanish-language sister news agency, Spahn said that the phenomenon occurred after Mass was over: “We exposed the Blessed Sacrament; I said the prayers for the exposition, and when I got up to go to the sacristy, this began to happen.”
“Some people saw it,” he said, and “couldn’t believe what they were seeing, and we have at least two pieces of footage.”

These recordings, he explained, were made by “people who quickly took out their cell phones, filmed it,” and passed it on to him almost immediately, since the priest asked them for that material “so they won’t alter it or anything.”

“So I attest that this is authentic, from the exact moment,” he said.

The priest said that “it’s not that they said aloud ‘look,’” but that the people who were adoring the Blessed Sacrament began to see what was happening, something that lasted “20 seconds, 30 at most.”

In subsequent statements, the priest told ACI Prensa that the event was repeated at various times between 9 p.m. and 11p.m., but "it was not seen by everyone, but by some," which he said "shows divine origin, because if it were a natural thing, everyone would see it at the same time."

The Archdiocese of Guadalajara hasn’t issued a statement on the phenomenon.


‘The heart of Christ, which beats with love for men’

Spahn said that, as “a personal interpretation,” he sees in what happened “the heart of Christ, which beats with love for men.”

This heart, he lamented, “is so outraged, so abandoned, so despised … that sometimes we don’t treat it as we should, with greater care, with more faith, with more dedication.”

For Spahn, “perhaps the Church will never make an official judgment, because it doesn’t need one either.”
“I’m not saying it’s a miracle officially, because I don’t have the authorization to do it,” he said.

“The archdiocese hasn’t been consulted about it because we were just passing through; now I’m in another diocese preaching,” he said, and explained that the local priest will be able to look for “people to sign and give testimony of what they saw, and this documentation can be sent to the appropriate person.”

Spahn also told ACI Prensa that hours before what happened in the Mexican parish he had blessed a picture frame with a photo of Blessed Carlo Acutis, who had a deep devotion to eucharistic miracles and used the Internet to make them better known.
The photo, he said, “was sealed with glass,” but that night “the photo began to ooze oil.”
“I’m simply saying that without making any judgments about it,” he said.
After the videos went viral on social media, the priest was contacted by telephone by Carlo Acutis’ mother, Antonia, with whom “we talked about this event, that we cannot officially call it a miracle, because the Church has to confirm that.”
“We are only saying that it’s an extraordinary occurrence that has no explanation to our limited natural science. We didn’t find any explanation,” he said.
Ana Paula Morales contributed to this article. 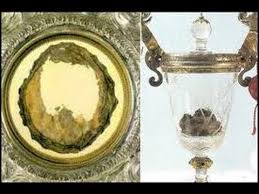 In the 8th century a monk was celebrating Holy Mass in Lanciano, Italy. He began doubting the real presence of the Flesh and Blood of Our Lord in the Eucharist. After he pronounced the words of Consecration ("This is My Body...This is My Blood"), the Host changed into a living piece of Flesh and the blood (under the form of wine) in the Chalice changed to real blood. The blood coagulated and split into five globules.
Joy filled the monk's soul and he turned to the Mass attendees and exclaimed:


Twelve centuries later, you can see the the miraculous Flesh and Blood in glass reliquiries. Many scientific experiments have been performed over the centuries. Here are the results:

-The Flesh is real flesh.
-The Blood is real blood.
-The Flesh and the Blood belong to the human species.
-The Flesh consists of the muscular tissue of the heart.
-In the Flesh we see present in section: the myocardium, the endocardium, the vagus nerve and also the left ventricle of the heart for the large thickness of the myocardium.
-The Flesh and the Blood have the same blood-type: AB (The blood-type identical to that which Prof. Baima Bollone uncovered in the Holy Shroud of Turin).
-In the Blood there were found proteins in the same normal proportions (percentage-wise) as are found in the sero-proteic make-up of fresh normal blood.
-In the Blood there were also found these minerals: chlorides, phosphorus, magnesium, potassium, sodium and calcium.
-The preservation of the Flesh and of the Blood, which were left in their natural state for twelve centuries and exposed to the action of atmospheric and biological agents, remains an extraordinary phenomenon.
-The Catholic Church teaches that Jesus Christ is really and totally present in either the whole consecrated
host or a fragment of it, and the same applies for the consecrated wine,
which, once consecrated, has become the Blood of Christ. 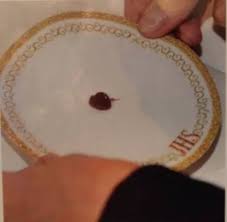 On December 25, 2013 at St. Jacek parish in Legnica, Poland while distributing Holy Communion, a Sacred Host fell to the floor, and was picked up and placed in a container of water. After some time it begin give a red appearance. The then-bishop of Legnica, Bp. Stefan Cichy, appointed a Commission whose task was to observe the phenomenon.
In February 2014, he removed a fragment of the red matter and deposited it on the corporal. In order to analyze the fragment, the Commission ordered the taking of samples and conducted appropriate tests by different competent authorities.
The final judgment of the Department of Forensic Medicine states: 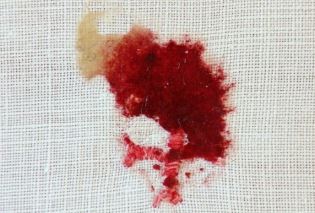 Sunday, October 12, 2008, just two weeks after the beatification of Svt of God Fr. Michael Sopocko (confessor and spiritual director of Saint Faustina), the priests were distributing Communion during Mass when a consecrated Host fell from the hands of one of the priests.
The priest picked up the host and placed it in the small container of water that normally sits next to the tabernacle for the priest to clean his hands after Communion. The host was expected to dissolve in the water, which would later be disposed of properly.

At the end of Mass, at the request of the pastor, Sr. Julia Dubowska (parish sacristan) poured the water and Host into another container and placed it in the safe in the sacristy, knowing that the consecrated host would take some time to dissolve. Only she and the pastor had the keys to the safe.

A week later, on October 19, when the pastor asked her about the condition of the host, Sr. Julia went to the safe, opened the door and noticed a delicate aroma of bread. When she opened the container, she saw, in the middle of the host (which was still largely intact) a curved, bright red stain, like a blood stain. The water was untainted by the color. The sister immediately informed the priest, who brought in the other priests at the parish and the visiting missionary, Fr. Ryszard Gorowski. They were all amazed and left speechless by what they saw. They immediately notified the Archbishop.

On October 29, the container with the host was transferred to the tabernacle in the rectory's Divine Mercy Chapel. The next day, by decision of the archbishop, the stained host was taken out of the water and placed on a small corporal, which was then put back in the tabernacle.

By mid-January of 2009, the altered fragment of the host had dried out naturally, and remained like a blood stain or clot; since then, its appearance has not changed.

In January 2009, the archbishop requested histopathological studies be done on the host. On March 30, 2009 he created an ecclesial commission to study the phenomenon. A piece of the altered host was taken and analyzed independently by two experts, Prof. Maria Sobaniec-Lotowska, MD, and Prof. Stanislaw Sulkowski, MD. Both are histopathologists at the Medical University of Bialystok. The studies were carried out at the university’s Department of Pathomorphology. The sample that was taken was large enough to carry out all the necessary studies. The studies were exhaustively described and photographed. The complete documentation was given to the Metropolitan Curia of Bialystok. When the samples were taken for analysis, the undissolved part of the consecrated host had become embedded in the cloth. However, the red blood clot was as clear as ever. This transformed part of the host was dry and fragile, inextricably interwoven with the rest of the fragment, which had kept the form of bread.

The results of both independent studies were in perfect agreement. Laboratory analyses confirm that the structure of the cardiac muscle fibers and the structure of the bread are intertwined in a way impossible to reproduce by human means. They concluded that the structure of the transformed fragment of the host is identical to the myocardial (heart) tissue of a living person who is nearing death. The structure of the heart muscle fibers is deeply intertwined with that of the bread, in a way impossible to achieve with human means, according to the declaration of Prof. Maria Sobaniec-Lotowska. The studies proved that no foreign substance was added to the consecrated host; rather, part of the host took the form of heart muscle of a person near death. This kind of phenomenon is inexplicable by the natural sciences. At the same time, the Church teaches us that the consecrated host becomes the Body of Christ, by the power of His own words at the Last Supper, repeated by priests during the consecration of the Mass.